Last winter you may have been surprised to see a lot of local trees covered with green leaves. Except they weren’t on the branches, they were all along the trunk of the tree and headed for the sky. While the sight of green might cheer you in the winter time, what you are seeing is English Ivy, which is an invasive menace. It was introduced during colonial times, and is now seen throughout North America.

You probably see it creeping along the ground until it finds something to climb, then it will go quickly up the tree or wall until it can grow no further. At that point bigger leaves will develop and white flowers that are eaten by birds who then spread it far and wide.

WHAT EXACTLY IS THE PROBLEM?

Interestingly enough, it is not the ivy that kills the tree directly. Rather, it creates competition for nutrients, water and sunlight, all of which are crucial to tree health. That is why ivy makes a tree weaker and more prone to disease. And because it ‘hugs’ the tree, it adds moisture around the bark, which attracts bugs and accelerates rot. 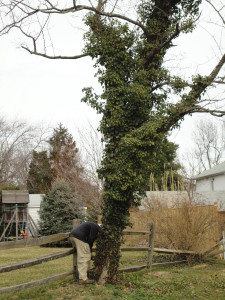 Branches usually die from the bottom up, creating a weight imbalance with the heavy ivy that can imperil the tree during storms.

Trees aren’t the only structures that can suffer from an abundance of ivy: Those “Ivy” League schools with the beautiful buildings can have damage done to the stones and the facade that can ultimately affect their structure.

SO WHAT SHOULD I DO?

To remove the threat from your trees, cut all ivy vines at knee height and chest height, and remove that section from the tree. Everything above that will dry up and eventually fall off the tree. At the ground level, yank as much as you can away from the base of the tree and pull out by the roots, out to two feet from the tree. The vines will try to grow back up the tree, so it must be cut back every couple of years. It’s work, but it’s worth the effort to save the life of the tree.

*Thanks to the Sea Cliff Tree Committee for the above information.